Pay No Attention to The Thought Behind the Words! 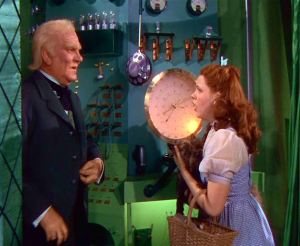 In high school I had a friend who wrote short stories…bad ones. Reading one of her stories was like reading 20 fortune cookies. Each line was more cryptic than the next and they looked more like lists of words than an actual narrative. I think she made the common mistake that many writers, politicians and human beings make in general, which is to conceal their underdeveloped or unoriginal thoughts with really, really big words. It’s like vocabulary Febreeze; big words are used to mask the smell of shitty thoughts and stale ideas. I’ve put together an alphabetical list of the words that are commonly used for the Febreeze effect:

We’ve all seen the vocabularly Febreeze phenomena. Someone gets a little drunk and their vocabularly mysteriously expands, the kid who never does the reading in class is always the one theorizing on the rise of neoliberalist idealism, and politicians using five syllable words with a blank, glazed look in their eyes. Here’s an example of a Febreezer in politics: Senator Bob Graham

Listen to Senator Bob Graham: “There has been a significant decline in the indicators of citizenship.” What does that even mean? Graham wrote an entire book entitled America, an Owner’s Manual and said that the main objective of the book is to teach people how to achieve “engaged citizenship.” He uses the words “engaged” and “citizenship” without ever definining what it means to be engaged or who is considered a citizen. Why didn’t dude just called his book Why Young White People Should Vote? Anyway, alls I’m saying is be wary of the syllable to word ratio. You never go wrong by asking, what you MEAN by that?

1 Response to Pay No Attention to The Thought Behind the Words!